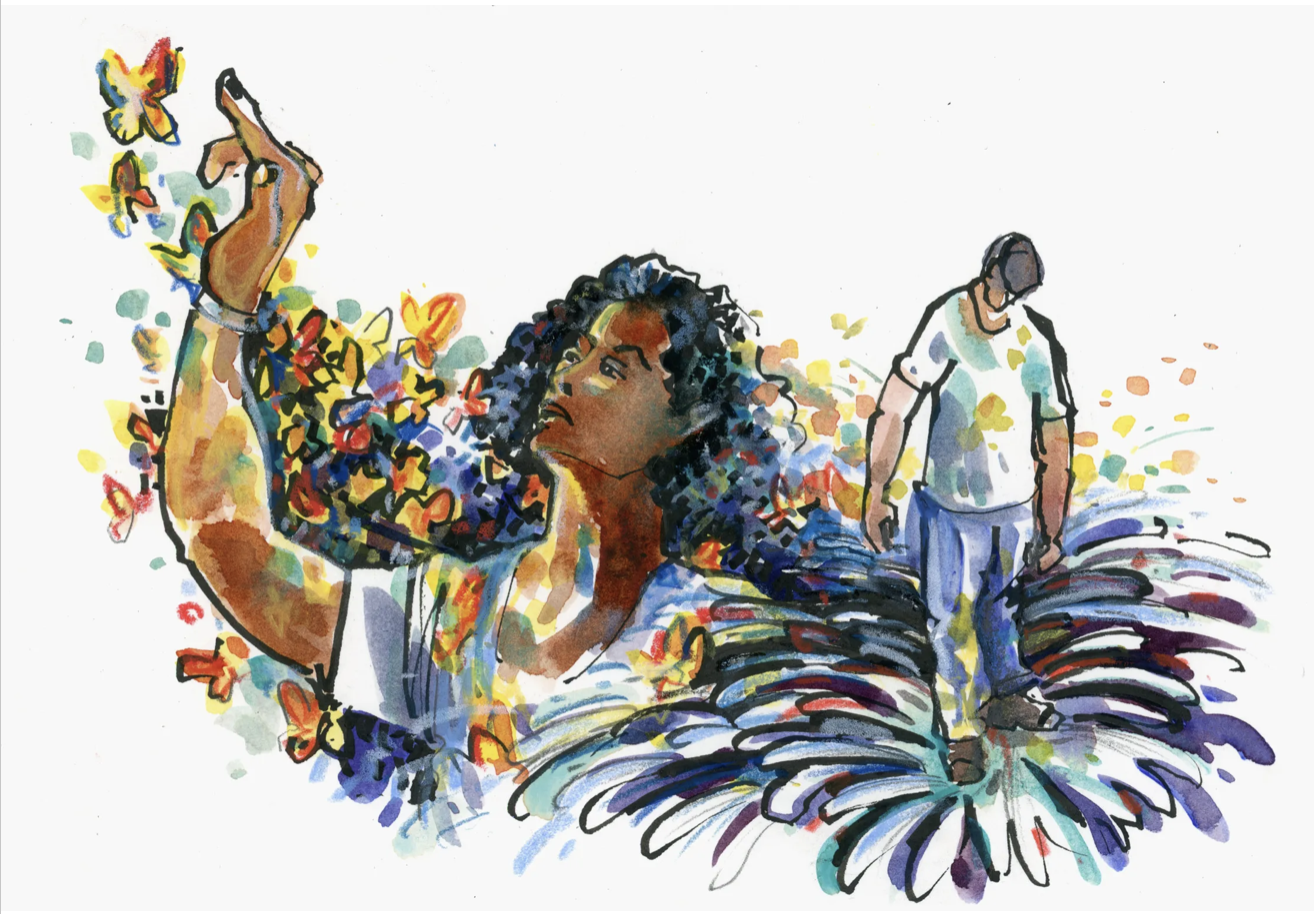 Stuart Semple still remembers the first time art knocked him on his ass. It was the late 1980s and 8-year old Semple was at the National Gallery in London, face to face with Vincent van Gogh’s Sunflowers. “The painting leapt off the wall; it was like it was hovering. It totally overloaded my system. My mum said that I was shaking,” he says. “Looking back, I’d say it was a state of awe.”

Since then, Semple has obsessed over ways to make that kind of museum experience available to everyone. He even knows the ideal place to build it. “The internet is probably one of the most powerful public spaces we have,” he says. “I’ve always believed that it will be a place that makes art accessible and brings people together.” A decade after he first beheld Sunflowers, in the age of dial-up internet, Semple built his first virtual gallery using Flash. Limited internet access and crippling load times made it almost impossible to use. Semple put the project to bed, but he never stopped dreaming of the virtual museum of the future.

By early 2020, Semple wasn’t the only one with online exhibits on his mind. Shows and art fairs the world over went virtual amidst Covid-19 lockdowns, and popular platforms like Kunstmatrix began hosting Art Basel and The Other Art Fair. Art flooded the blockchain in the form of non-fungible tokens (NFTs). It was an inflection point. Museums and galleries had long worked to share art virtually, but the consensus often remained that it was a substitute, never as good as seeing a painting or sculpture in a brick-and-mortar institution. “Art needs to be seen in person,” says KV Duong, an artist who curated his first online show last year. “Art lovers want to see the texture, smell the ambiance, meet the people, and just feel that physical space of standing in front of a work. For museums, the biggest tick mark is community engagement, and I don’t know if you’ll be able to get that in a virtual space.” Semple’s time had come to prove that notion wrong—or at least try.

In March of last year, Semple assembled a team. Funded by Semple himself, the group’s skills spanned art, curation, architecture, and technology. Their goal? Build VOMA (voma.space) —the fully online museum he had dreamed of for so long. Within half a year, Semple’s vision was a (virtual) reality, free and open to anyone who wants to visit. With its flexible architecture, the current setup—two large galleries full of art, an outdoor sculpture pavilion, and an artist space for performance pieces—is just the start of a museum that can expand endlessly. Created using the video game software Unreal Engine, it’s entirely viewable on any device with a web browser.

“You can do anything—that’s really exciting and really intimidating,” says Semple. “We don’t need to ship anything, move anything, or insure anything. If a gallery isn’t big enough, we just make it bigger. We don’t need the planning commission to put a new floor in.”

What’s even more exciting is the art VOMA can show. In its recent exhibit, Why We Shout: Art and Protest, a destroyed Diego Rivera fresco from Rockefeller Center in New York City shares the room with one of Banksy’s most iconic pieces, painted on a wall in Palestine—a juxtaposition impossible in a physical museum. The virtual grounds also showcase the Triumphal Arch of Palmyra from Syria, which was destroyed by ISIS in 2015 and reconstructed in VOMA using 3D scans of the original structure.

Going virtual might’ve allowed Semple’s imagination to run wild, but that doesn’t mean it allowed VOMA to escape paperwork. Some physical museums are still forming their policies for digital loans and licenses. Copyright and image rights organizations like DACS are involved, as are artists’ estates, which means color reproduction, framing, and lighting are scrutinized by multiple parties, much as they would be with a physical loan. VOMA’s team is equally thorough and detail-oriented in its research and recreation process. “We treat the works with a lot of respect and spend a lot of time making virtual versions of them the best we possibly can,” says Semple.

For all its bells and whistles, what might be most striking about VOMA is, well, how boring it looks. With technology that creates fantastical game worlds readily available, its creators could’ve set it on Tatooine if they wanted to, or at least the moon. Instead, its aesthetic might best be described as Marfa Modernism. Lots of open space and clean lines. Stucco and industrial-looking steel fixtures. There’s even a gift shop. “We don’t want anything to detract from the work, so we’ve done everything we can to ground it in a familiar experience,” says Semple. “No explosions, no flying, no crazy light effects. It’s a lot more minimal and focused on artistry.”

In keeping with his emphasis on accessibility, Semple canned the first version of the VOMA, which his team spent months building. He describes it as “phenomenal,” but it required a powerful computer and gigabytes of downloads and plug-ins to run. “The geeks loved it,” he says, “But if you were in a developing country on a small device, you didn’t stand a chance.”

Giving people that chance is the point. It’s still too early to tell just how much virtual museums will upend the art world, if at all—VOMA is still only averaging about 500 visitors a day. But it does provide a blueprint for ways to share works people might not see otherwise, even if it can’t ever replace the museum experience. Virtual setups also, Duong notes, make it easy to curate shows. “In the virtual space, there is more flexibility to pick different sizes of rooms,” he says. “You can move the artwork around, you can frame it all the same.” The process works so well, Duong used a virtual platform to plan a recent physical show. “On hang day,” he says, “it was seamless.”

While many in the art world debate the pros and cons of virtual and physical spaces, one group—teamLab—is creating immersive experiences that transcend those distinctions. An international collective of several hundred artists, programmers, engineers, CG animators, mathematicians, and architects, teamLab believes the boundaries between the self, the virtual, and the physical world never really existed. To prove it, they use augmented reality and other immersive technologies to remove what they see as artificially imposed barriers.

Their recent exhibition at the Asian Art Museum in San Francisco, teamLab: Continuity, is a collection of pieces projected across multiple rooms. With nothing prerecorded, the presence and movement of visitors generates and changes each piece so that it’s constantly evolving. Because it requires in-person interaction, anyone who wants to see Continuity has to experience it IRL. In one room, standing still creates images of blooming flora throughout the space. Step on a flower, and it withers and dies. Crows swoop across other rooms, leaving trails of light, scattering what they fly past, but dissolving into giant flowers when they crash into people. “Through an interactive relationship between the visitors and the artwork, human beings become an intrinsic part of that artwork,” the collective says.

Floored by the vibrant imagery, yet skeptical of the idea of dissolving the barriers between art and viewer using technology, I wander into a room where a swarm of butterflies spawns at my feet and flies up to join the masses flitting around. A woman reaches out to touch a projected butterfly and visibly recoils as it falls apart to her touch. Watching her respond as if it were a sentient being, I sense, for just a split second, a wall coming down, a boundary disappearing.

Pondering the connections of technology and human experiences, my mind wanders back to 8-year-old Semple and the sunflowers that rocked his world. Could his experience be replicated in a virtual museum? “Sadly, I don’t think it can,” he says. “I believe the technology is there, but the vision to use that tech for beauty and art hasn’t quite caught up.” Then he perks up. “But it’s coming.”