Can Clubhouse recreate those art world conversations we are all missing? 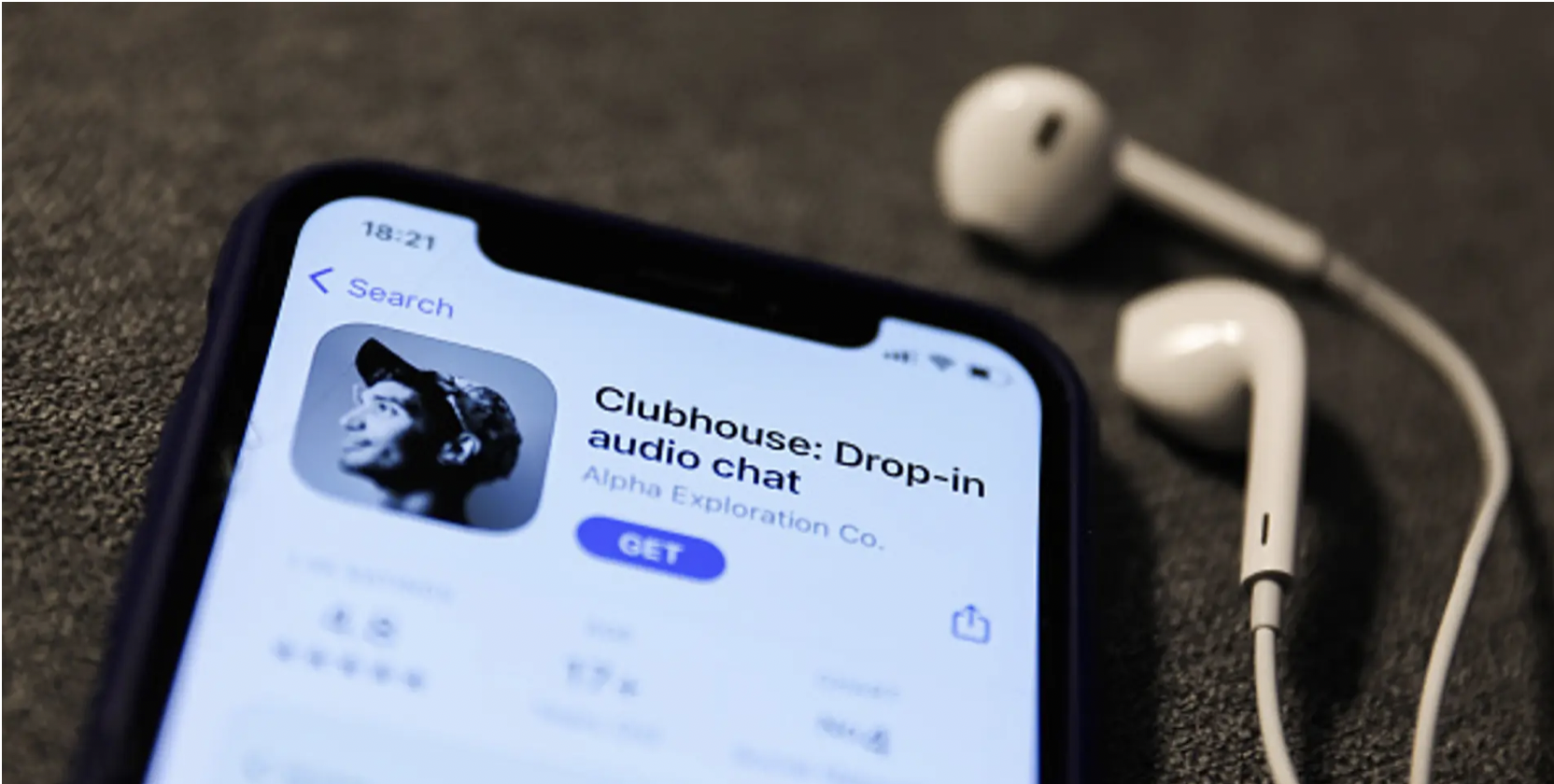 I’ve been on Clubhouse—the invitation-only social media app gaining members even faster than it amasses bad press for privacy invasions—for about three weeks now, just long enough to get myself into trouble. I keep clicking on friends’ names without realising I am creating a new “room” to welcome them to the app. And when I join rooms run by people I know, I’m too often bumped up from “listener” to “speaker”, even though I’m not paying enough attention to say anything meaningful because I’m also working or making lunch or both.

So I thought it was about time I spent a day actually paying attention. What is the art world talking about on Clubhouse? Does the app replicate the usual exclusionary hierarchies or replace them? Will I get to hang out with artists I haven’t seen since the pandemic started? And who are these people pushing the NFTs anyway?

I chose Tuesday, 3 March because I had a break between deadlines and saw that there were a few regularly scheduled art talks that day, knowing impromptu rooms would crop up too. All the discussions are basically live-streamed audio (no video) where self-appointed moderators begin a conversation, during which time they can bring any of their listeners onto the stage as speakers. In other words “Clubhouse is a lot like an interactive podcast,” as the Los Angeles art critic Shana Nys Dambrot told me last month during my first visit to the app.

8:45am: I find my Clubhouse app on my iPhone by looking for a black dude in a baseball cap smiling up at us. I think you could write a whole book about this image—the man is both a real Clubhouse user, the musician Bomani X, and a Silicon Valley white bro fantasy of what it means to be cool. I click the calendar icon up top and it gives me a list of “Upcoming for You” event suggestions based on some interests previously checked: art, architecture, books. I join one, already in progress, called “Art Outside of the US” with the art dealer Om Bleicher and the publicist Rebecca Taylor among the moderators. I hear a man talking about Jacques Derrida on objects and how museums “tokenise” certain expressions of culture. I flash back to the PhD programme that I dropped out of years ago. It feels too early in the day for Derrida, and I drop out of this room too.

9:01am: I join instead “L’art et les NFT: street art et NFT” which also turns out to be vexing. I follow along for a few minutes while they talk of “la certification d’authenticité” and “la communauté des fans” that would allow street artists to benefit from making these new wholly digital artworks that are born on and trade on the blockchain. But soon, the French gets too fast and slangy for me—not to mention the fact that NFT is already a foreign language.

9:08am: I suck it up and go back to “Art Outside of the US,” where the LA artist-filmmaker Juri Koll shares a fascinating overview of different artist-created and state-owned art museums in Estonia. From there things fall apart, with artists using the platform to promote their own work. One Italian artist promotes, earnestly it seems, his own gift for “spirit” photography. I’ve heard Clubhouse described as the social-only component part of an art fair, where you can make the rounds to say hello and join different conversations as you see fit. But of course, the one thing verboten at art fairs is unrepresented artists swinging by with portfolios or trying out elevator pitches. Maybe Clubhouse really is—at least once you get an invite—a great leveller?

9:53am: I see that the artist Nancy Baker Cahill, who has been working in AR and VR formats with great effects, is in a room talking about NFTs and I catch the tail end, as a speaker complains that everything is moving too quickly to be financially sound. Evelyn Hriberšek, a new media artist from Germany, quotes Oscar Wilde to make a point about Clubhouse’s obsession with NFTs: “When bankers get together they talk about art, and when artists get together they talk about money.” Clubhouse being, I gather, the place where bankers and artists—or would-be bankers and hopeful artists—meet.

10:00am: I jump onto an “Art World AMAA” (Ask Me Almost Anything) with New York art consultant Sheri Pasquarella and Boston-based collector Beth Marcus, who sits on the board of the Rose Art Museum and supports the MFA Boston and ICA Boston. Offered as part of the Contemporary Arts Club created by the art consultant Astrid Oviedo Clark and the entrepreneurial artist Beau Dunn, it’s the kind of friendly collecting talk that you might find pre-Covid at a gallery near you. Pasquarella, who has worked with Marcus for years, asks how Marcus became a collector (she started with Barry McGee) and why she still buys outsider art on her own (the dealers’ enthusiasm is contagious).

It gets more lively when listeners chime in, with one asking a question about emerging artists who never transcend that category. “This is a community and business that’s constantly in flux. Galleries that you think are going to be there forever sometimes go out of business,” Pasquarella says. “When I was director of Gorney Bravin + Lee, we represented many amazing artists, like James Welling, Catherine Opie and Jessica Stockholder, who found new homes, but there were also artists who did not find galleries when we closed and have struggled for visibility ever since.”

Then the New York art dealer Gracie Mansion joins the stage to question the ethics of selling or buying outsider art. “When I go to see outsider art, the inequities in that system interfere with my truly appreciating the art,” she says, noting that the artist-dealer relationship in those cases is very rarely a 50-50 partnership. “Think of [Martín] Ramírez, who has living relatives. Are they getting any money from what’s being sold?”

11:05am: I join “The Artist Lounge: Women in the Arts,” a recurring club that has named the Guerrilla Girls their topic today, with moderators adopting gorilla masks as their profile pics for this occasion. For this one, I grab my earbuds so I can walk around my neighborhood while I listen. As I start the walk, I’m irritated to hear one woman after another speak up to say they love this group but don’t know anything about the Guerrilla Girls.

But by the time I come back from the walk and sit outside on my steps, listeners are making more insightful comments. One talks about the power of anonymity and wisdom of sidestepping the cult of personality for feminists seeking change, while Shana Nys Dambrot praises the Guerrilla Girls for being intergenerational and encouraging younger artists to contribute. “They are not jealous of their legacy,” she says.

I begin to regret my rush to judgment and appreciate how truly inclusive this group is. All rooms on Clubhouse have a built-in hierarchy: the moderators at the top of screen who can invite others to the stage, a second tier of people “followed by the speakers”, and the third crowd labelled “others in the room”. This is the first room I visit where the listener and speaker groups mix rather freely and frequently, for better and worse and then better again.

12:50pm: Over lunch, I pull up the site’s Community Guidelines to look at its privacy disclosures. They have been criticised for being even more invasive than Facebook, requiring your phone number just to join and your contacts to participate more fully. (Also an iPhone; it only works with iOS systems now.) I don’t find that notice but do find a warning that looks like it’s written just for me: telling me not to “transcribe, record, or otherwise reproduce and/or share information obtained in Clubhouse without prior permission.” It’s not clear who to approach about permission but it’s too late to be “prior” I think. Besides, I have already decided to follow the same journalistic policy I do when quoting from Facebook; I will reach out to each source before publication to make sure they are okay with my quoting them.

1:32pm: I join a room already in progress called “Art: Galleries don’t want Instagram Artists”. Anika Meier, a columnist for Monopol, is talking about Beeple’s recent NFT success and artists who don’t need galleries. Others debate what “IG artist” even means. Art consultant Todd Levin talks about making discoveries on Instagram but still wanting to see something of the artist’s work in person. Someone mentions Kaws for the third or fourth time today, I’m losing track. I wonder, should there be a Clubhouse Drinking Game where you have to chug whenever someone mentions Kaws? By the time I leave the room, 386 people are on the chat—the biggest room I’ve visited yet.

2pm: I leave the IG crowd to join “Contemporary Art as Sculptural Edition” led by an LA artist I know, Kim Schoenstadt; an LA arts lawyer I know of, Sarah Odenkirk; and Steven Beyer, who produces artists editions in New York. Beyer discusses his current project, producing Schoenstadt’s Tetherball for Kippenberger sculpture, which nods to the artist’s bent-over Street Lamps for Drunks. “I’m doing my own version by hanging a tetherball off of these streetlamps. They are working streetlamps, solar powered, so plug and play functional objects, so to speak,” Shoenstadt says.

About midway through the talk, I raise my digital hand and ask my first-ever question on Clubhouse: Did you have to work with the Kippenberger estate on this? Schoenstadt’s answer is no, and Odenkirk makes a broad point about “transformative” artworks qualifying for “fair use”. Beyer meanwhile talks about being on the wrong end of a €45m copyright infringement suit when he produced the Giacometti Variations for John Baldessari in 2010—an edition of 15ft-tall bronze figures even more anorexic than Giacometti’s, shown modelling clothes or objects. “In Italy there is no equivalent to our fair use laws,” Beyer says.

Ayn Grinstein of the limited-edition art publisher Gemini G.E.L. joins the stage and says in their work with Baldessari, they did go to Apple to get permission to use fruit and vegetable emojis. The moral of her story: you don’t want to be sued by Apple.

If you’re going to ask permission, are you ready to abide by that response?

At this point, Odenkirk gives artists some useful advice: “If you ask permission and you’re denied and go ahead anyway, you skip from simply copyright infringement into willful infringement. Instead of just copyright damages, you have punitive damages as well. If you’re going to ask permission, are you ready to abide by that response?”

4:08pm: I go back to the room “Art: Galleries don’t want Instagram artists,” which I am shocked to see is still going on three hours later. Todd Levin is still talking, or I should say talking again. I have a queasy Groundhog Day feeling.

5:00pm: I join “Black Art: In the Absence of Light” inspired by the HBO film of the same name. The two moderators, artists Courtney Savoy Harper and Bean Amelia, have drawn up strong questions and added them to their bio pages, like how does this era of greater Black visibility “benefit or not benefit you”? Unfortunately most listeners have not yet seen the documentary. One suggests that this group on Clubhouse should create a viewing room for it. And I start thinking about how great Clubhouse would be if you could watch movies or see art together there too, as I walk to the kitchen with voices in my head and get ready to make dinner.