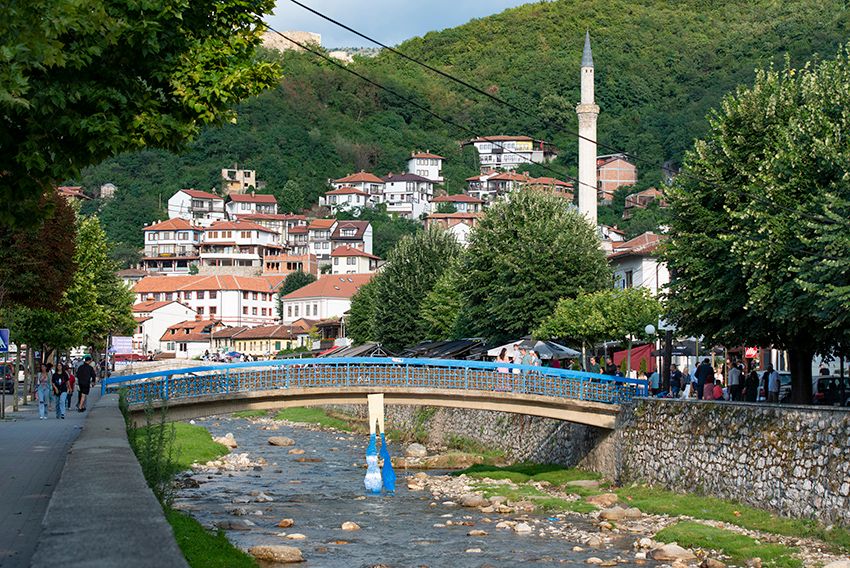 Founded in 2014, the Autostrada Biennale was established by Leutrim Fishekqiu, Vatra Abrashi and Baris Karamuco, who made it their mission to transform contemporary art in Kosovo by focusing on socially engaged and immersive public-facing projects. The local trio recently acquired a former German military hangar, converting it into a venue for contemporary art in Prizren.

Called What if a Journey…, the third edition was devised by the Berlin-based curators Övül Durmusoglu and Joanna Warsza, who last year mounted the acclaimed Die Balkone: Life, Art, Pandemic and Proximity exhibition, which presented art on balconies in Berlin’s Prenzlauer Berg district during lockdown.

Taking visitors on a road trip through Kosovo’s capital Prishtina, continuing along the Lumbardhi river towards Prizren, before finally ending in Peja, Autostrada—which opened on 1 July and runs until 11 September—explores the process of meandering the ancient pathways that once connected Venice to Constantinople.

In Hera Büyüktaşciyan’s My Eye’s Pupil Is Your Nest (2021), the remnants of Prizren’s aquatic memory are marked by a piece of large, unfolding blue drapery that descends from the top of Prizren Fort to the city centre several hundred metres below. Evocative of the large-scale public wrappings of Christo and Jeanne-Claude, Büyüktaşciyan’s work marks the interruption of the natural aquatic network of the rivers and channels that once would supply Prizren, now replaced by modern delivery systems that leave many citizens cut off.

Meanwhile, a new film by Agnieszka Polska is being shown inside a defunct former hydroelectric facility in Prizren. The Thousand Year Plan, which tells the story of two young engineers who, while building a power grid to supply electricity to the Polish countryside after the end of the Second World War, stumble upon a couple of anti-communist partisan fighters still in hiding. The film examines how the nuances of the electrical age brought forth new dimensions of hope.

The same venue features an acoustic installation by Bora Baboci, made in tribute to the water that once fed the city from there. Baboci, whose practice spans architecture, drawing, installation and performance, previously developed a running commentary on the significance of water systems as part of a 2019 residency in Limerick, Ireland.

At the nearby Shotman Mill, a beautiful stone structure that houses one of the last surviving mills in Prizren, the HAVEIT collective—made up of two pairs of Prishtina-based sisters—wear wedding dresses and hold a tea ceremony to explore gender roles.

Alban Muja’s Moving Monument, meanwhile, is a circular bronze replica of an anti-fascist work from the 1990s that has since disappeared, but which Muja remembers from his childhood in Mitrovica, a city in Kosovo near the Serbian border. Muja, who represented Kosovo at the Venice Biennale in 2019, often places an emphasis on reclaiming solidarity among the people of former Yugoslavia, with his works containing poignant social commentary on the legacy of public and urban space in Kosovo.

At the Shani Efendi House in Prizren, home to political and social meetings during the communist era, a thought-provoking research installation by Sezgin Boynik and Tevfik Rada tells the story of Ferit Bayram (1888-1965), who introduced the modern Turkish alphabet to Yugoslavia.

Installed on the facade of a house along the river in Prizren are several large-scale tapestries made by Małgorzata Mirga-Tas. Continuing in the tradition of her exhibition at the KW Institute for Contemporary Art during the last Berlin Biennale, Mirga-Tas’s ongoing project HERStories depicts the lives of extraordinary Roma women; her new series depicts fellow contemporary artists such as Delaine Le Bas, incorporating fabrics that they have donated.

In Prishtina during Pride Week in July, Petrit Halilaj and Alvaro Urbano transformed the National Library of Kosovo with their flower installation previously on show at the Crystal Palace in Madrid’s Reina Sofia. Called Forget Me Not, this iteration references the Kosovar civic campaign for equal rights, particularly for the LGBTQ community.

Down the highway in the city of Peja, the biennial takes shelter in a former art space, Exit, which opened in the summer of 1999, immediately after Nato’s arrival. Back then, Exit was nomadic, evolving under the stewardship of Sokol Beqiri and Erzen Shkololli to become a space where post-conflict resolutions could be discussed between artists and communities. From 1999 to 2006, Exit hosted art projects by, for example, What, How and for Whom/WHW, Anri Sala, Dan Perjovschi and Edi Hila.

This year’s Autostrada Biennale delivers on the freewheeling nature of those early Exit gatherings: independent, beholden to no one except those who show up and actually care about the art.https://production-website-scripts.s3-eu-west-1.amazonaws.com/newsletter-widget.htmlMore NewsTopicsKosovoContemporary art