The Met will return three African art objects to Nigeria 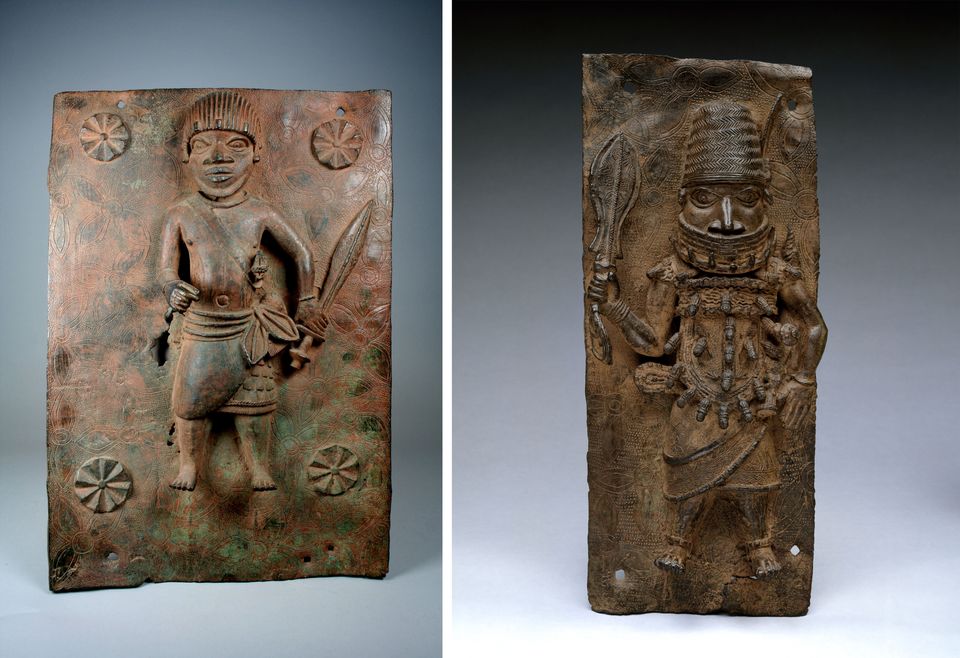 Joining recent moves by European museums to return African art treasures to Nigeria, the Metropolitan Museum of Art in New York announced today that is sending three objects back to the country. Two of the works, a pair of 16th-century Benin Court brass plaques of a Warrior Chief and Junior Court Official, were donated to the museum in 1991 by the Modern art dealer Klaus Perls and his wife Dolly, while the third, a 14th-century Ife Head, was recently offered to the museum for purchase by another collector.

The museum decided to return the works after conducting research in collaboration with the British Museum, with input from the Nigerian National Commission for Museums and Monuments (NCMM). The two plaques had been part of a 153-piece collection of African royal treasures given to the museum by the Perlses 30 years ago that included bronze figures, carved elephant ivory, masks, jewellery and musical instruments. Explaining his interest in this work, Klaus Perls said at the time: “I started buying African art simply because I liked to see it together with the works of the Picasso generation of artists in which I specialized as a dealer. Soon, however, my predilection for Benin art asserted itself, and it became the only kind of African art I continued to buy, until, quite unnoticed, it developed into a collection.”

According to the museum, the plaques were taken from the Benin Royal Palace in 1897 by British military forces and then entered the British Museum’s collection. Around 1950-51, the London institution transferred them with 24 other items to the National Museum in Lagos. The works were somehow removed from that museum “at an unknown date and under unclear circumstances”, the Met says, and were sold on the international art market, where they were acquired by Perls. Both plaques have now been deaccessioned by the Met.

The bronze Ife Head, meanwhle, was offered to the museum for purchase by a collector whom the Met did not identify. The 14th-century work originally came from the Wunmonije Compound near the royal palace in Ife. In 1938, a cache of realistically carved portrait heads created by the Yoruba people were discovered in a construction project at the site, and while most went to the National Museum of Ife, several were taken out of the country, leading the Nigerian government to more tightly control the export of antiquities.

According to the Met, the individual who offered the head “had been under the misapprehension that legal title to the work had been granted by the NCMM”. Inquiries made by the museum proved otherwise, it adds, and the Met “arranged with the seller and their agent for the Ife Head to return to its rightful home”.

The Met says it will hold onto the works until the NCMM’s director general, Abba Isa Tijani, can travel to New York to retrieve them. “We sincerely appreciate the transparency exhibited by the Metropolitan Museum of Art regarding issues leading to the return of these objects,” Tijani says in a statement. He adds that Nigeria is open to opportunities “for collaborations of all sorts, including travelling exhibitions with many of these exquisite objects”, and that it plans to work “with as many willing partners as possible” on initiatives such as the Digital Benin project.

Max Hollein, the Met’s director, says in a statement that “the retention of these works within Nigeria’s national collections is critical to the well-being of the museum community and to fostering ongoing cooperation and dialogue between the Met and our Nigerian counterparts.” Among the projects that the Met would like to work on with Nigeria, he adds, is the planned Edo Museum of West African Art in Benin City.

“We welcome the rapprochement developing in the museum world, and appreciate the sense of justice displayed by the Metropolitan Museum of Art,” says Alhaji Lai Mohammed, Nigeria’s minister of information and culture, in a statement. “Nigeria enjoins other museums to take a cue from this. The art world can be a better place if every possessor of cultural artefacts considers the rights and feelings of the dispossessed.”