Contract Killers: artist Nancy Baker Cahill challenges the efficacy of the ‘smart contracts’ behind NFTs with an augmented reality project 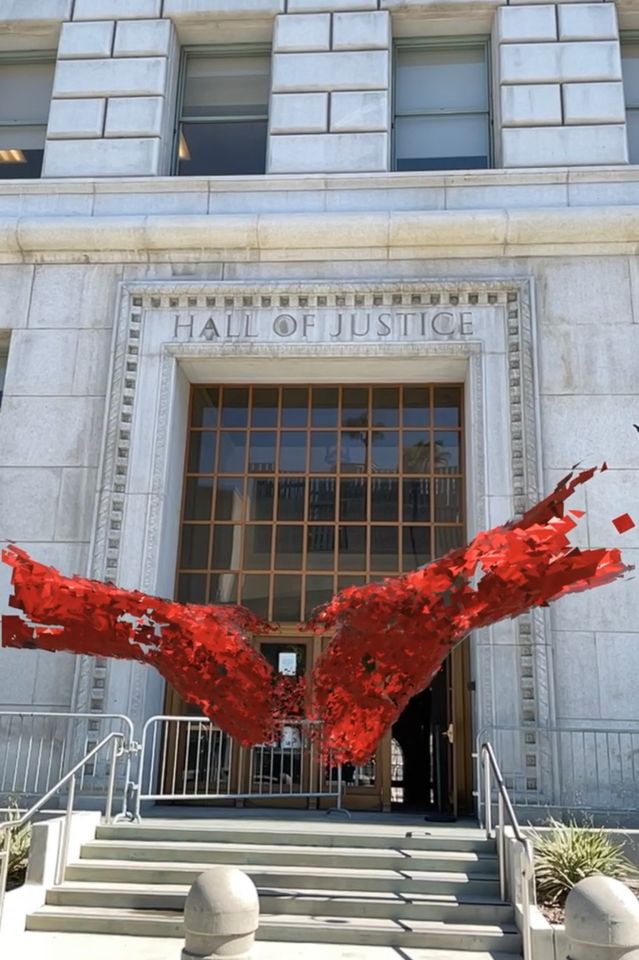 When in 1985, a Texas jury awarded Pennzoil $10.53bn in damages for getting the short end of the contractual stick, the world learned just how powerful a handshake could be. One year prior in New York, the oil giant had reached an informal, but binding agreement to purchase a large stake in Getty Oil for $5.2bn. Representatives from each company shook hands and the deal was announced. Shortly afterwards, Texaco made a very appealing counteroffer, which Getty accepted, leaving Pennzoil in the lurch. At the time, the verdict was the highest in US history and forced Texaco to file for bankruptcy, all because Pennzoil’s attorneys argued a handshake is a moral commitment, an agreement between two parties, a contract, the breaking of which has repercussions.

But where, in the pixelated world of NFTs, are the repercussions for breaking contracts, for going back on your word? Therein lies the crux of Contract Killers, a forthcoming project by Nancy Baker Cahill. The artist has partnered with the technology studio Snark art, open source blockchain platform Tezos, to create an augmented reality series that points out not only the deficiencies between owners and creators of NFT’s but also to the greater imbalance of power and lack of trust that underlays society.

To Baker Cahill, the promise of blockchain, of a decentralised network and accountability, has not only failed to deliver but “simply offered new and unregulated means for existing structures to creatively re-entrench and rebrand themselves.” Her project not only speaks to the “ephemeral quality of contractual agreements inherent in digital art and the exploitation of artists by galleries and auction houses,” but also reaches further and attempts to comment on years of social inequalities.

Each of the three pieces features two augmented reality hands, reaching out toward each other in space. But before they can connect and come to terms, the appendages dissipate and swirl upwards into a cloud of pixels. The handshakes will appear in three locations that Baker Cahill says represent “a realm of obligation and agreement where trust evaporates, where stated contracts continue to fail individuals and communities.”

Silver hands reach for each other in front of City Hall in Los Angeles, a metropolis with a large and ever-growing unhoused population “to underscore the dissolution of policies that force us to recognise that we belong to each other”; red hands fail to unite in front of the Hall of Justice to “address the profiteering and injustices of the prison industrial complex and court system”; and green hands dissolve over a pile of money to point out “the gross inequities of late-stage capitalism”. The project will use Tezos’s proof of stake blockchain, which consumes over two million times less energy than the most widely used blockchain in the art world, Etherium.

Sarah Odenkirk, a partner with the law firm Cowan, DeBaets, Abrahams & Sheppard who focuses on fine art law, shares Baker Cahill’s passion and sees a need for accountability surrounding digital art and NFT’s and their “smart contracts”. Odenkirk says “there’s not really much of a contract there,” other than enough information to sell the piece, including its name and origin —“But not necessarily who created it, because there’s no way of checking to see if whoever minted the NFT actually made or had the rights to the work,” she adds—and the resale royalties section that is becoming standard in NFT production.

One major problem, she says, is how easily sellers can go off-chain and use Venmo, or PayPal to sell work on the secondary market and avoid the royalty completely. “It’s a nice idea, but there has to be some enforcement mechanism, because there is not really much in an NFT that protects anybody.”

There are myriad ways NFT’s are problematic, Odenkirk says, the two most glaring of which have to be their inability to establish a reliable provenance, and the lack of recourse should the embedded link to a purchased work of art break, or the location of that work disappear.

Odenkirk is working with Baker Cahill, along with institutional guidance from Hesse McGraw, the executive director of the Contemporary Arts Museum Houston, to build an off-chain contract for Baker Cahill’s forthcoming works of art that will protect NFT owners and creators. “There’s a lot of FOMO [fear of missing out] at work here, we are still in that gimmicky stage where people are trying to figure out what NFT’s are. There’s a lot of scramble and frenzy to mint and to buy NFT’s. But I do think that there’s something here,” Odenkirk says.

“This is a novel way of communicating with an audience, of building a community, all within that marketplace context. I believe this can shake out into something more sustainable and long term,” she says. But for now, she warns that the term smart contracts can be very misleading despite the term’s “soundbite appeal”. Since the contracts embedded in NFT’s are essentially just if/then statements, Odenkirk says “auto code” would be a more fitting moniker, because no actual legally binding agreements are included. For now, she adds, “real smart contracts still come from attorneys.