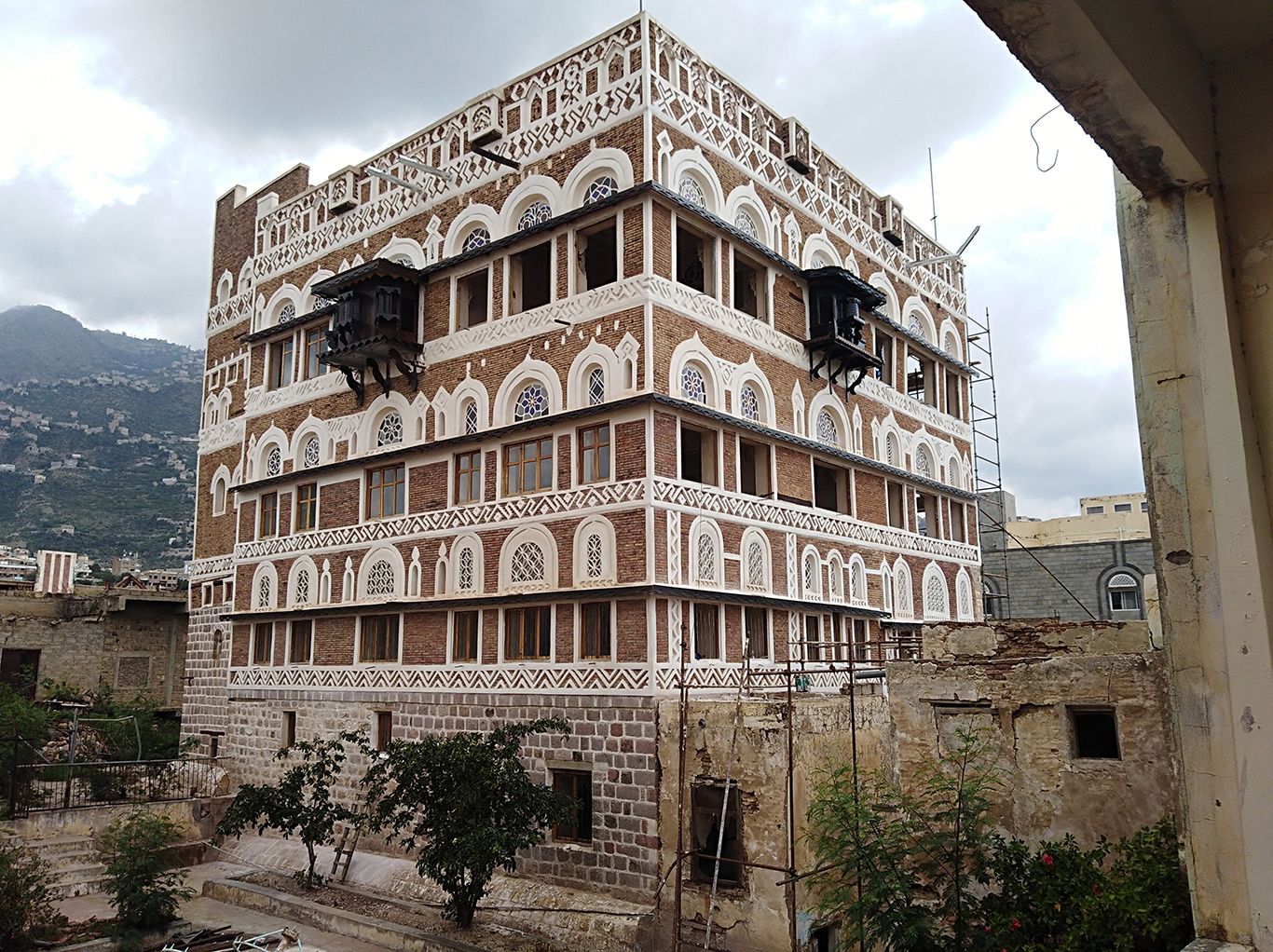 The World Monuments Fund (WMF) reports that it has made strides in rehabilitating historic sites in the Yemeni city of Taiz, devastated by a war that has killed hundreds of thousands of people across the country in a mammoth humanitarian crisis.

In March, local restorers overseen by the organisation completed work on an emergency stabilisation project at Qubbat al-Husayniyah, an Ottoman-era mausoleum in the city that had deteriorated amid the chaos, the WMF says. In February they finished the restoration of interior spaces at the Imam Palace, another Ottoman-era building shelled by rebels in 2016 that is part of the city’s museum complex, it adds.

Once the cultural capital of Yemen, Taiz saw some of the most lethal fighting between government forces backed by a Saudi-led coalition, including powers like the US, and Houthi rebels supported by Iran. Between 2015 and 2017, the city was a principal battleground, with fighters on either side dividing the city into encampments as shells fired by opposing forces rained down.

In addition to the devastating human casualties, Taiz residents witnessed damage to historic buildings in their Old City that were an integral part of their cultural fabric.

In 2018, the WMF launched an initiative to stabilise landmarks in the city, coaching a team of Yemeni restorers who received training in conservation in Kuwait and Cairo under its guidance. The same year, the organisation included Taiz’s Old City on its World Monuments Watch.

Some of the sites targeted by the organisation had received direct missile hits, others were buckling from war damage to adjoining buildings, and still others suffered from a lack of maintenance and care due to the chaos and uncertainty surrounding the conflict, says Jonathan Bell, the WMF’s vice president of programs.

Even as fighting continues elsewhere, Bell says, “at the moment, conflict is not in that corner of the country, and we hope that the stability spreads. Compared with 2015-17, it’s much more stable [in Taiz] than then.”

The WMF says that the Qubbat al-Husayniyah mausoleum had been rapidly deteriorating because of financial shortfalls exacerbated by the war. Bell says that vibrations from war damage to nearby structures widened cracks. Beginning in 2018, restorers repaired the cracks in the building’s dome, attacked vegetation that threatened the structure and reinforced the foundation, as well as shoring up walls. Damaged stones in the façade were repaired or replaced.

In 2019, the organisation says, it received funding from the British Council Cultural Protection Fund for the rehabilitation of Imam Palace, part of Taiz’s museum complex, which was damaged by shelling in 2016. The restoration of the interior spaces followed work to repair the palace’s façade.

Now the WMF is gearing up to rebuild the adjoining Al-Badr Palace–which received a “direct hit” in the conflict, Bell says, and partially collapsed–in cooperation with the International Alliance for the Protection of Heritage in Conflict Areas (Aliph). Meanwhile the WMF is working with the Musée des Beaux Arts in Lyon, France, to create a museography program for the entire museum complex in Taiz. “There are a lot of opportunities for upgrading their skills,” Bell says of the museum complex’s staff members. Ultimately, the hope is that museum audiences will return “who are proud of their identity and want to reassert their pride”.

Another target for restoration is the 13th-century Hammam al-Mudhaffar, the oldest surviving public bath complex in Yemen. It fell into disrepair and was being partially used when the war began and then ceased functioning altogether.

Deteriorating from years of neglect, it could once again cement social connections among residents if rejuvenated, the WMF says. Traditionally visitors have travelled from rural areas to the baths in search of healing or as a ritual before a wedding, the WMF says.

The organisation says it will address broken domes, missing glass, leaks in the roof, a lack of waterproofing and failing electrical and water systems. Bell says he expects the work, which is to begin this summer, will take 18 months.

The WMF is also developing a set of conservation guidelines that will guide the future of Taiz’s Old City, whether officials are seeking to widen a street, consider new development or rent their homes, Bell says. Going forward, he adds, “it will be a valuable part of our contribution.”

Noting that Taiz is Yemen’s third-largest city after Sana’a and Aden, Bell says he hopes that the work there will demonstrate the role that “heritage can play in recovery”.

“There’s a lot of conflict in Yemen and a lot of uncertainty,” Bell says. “This has given us the opportunity to learn how to work in a conflict environment.”