‘Like witnessing my own funeral’: Michael Landy on destroying everything he owned 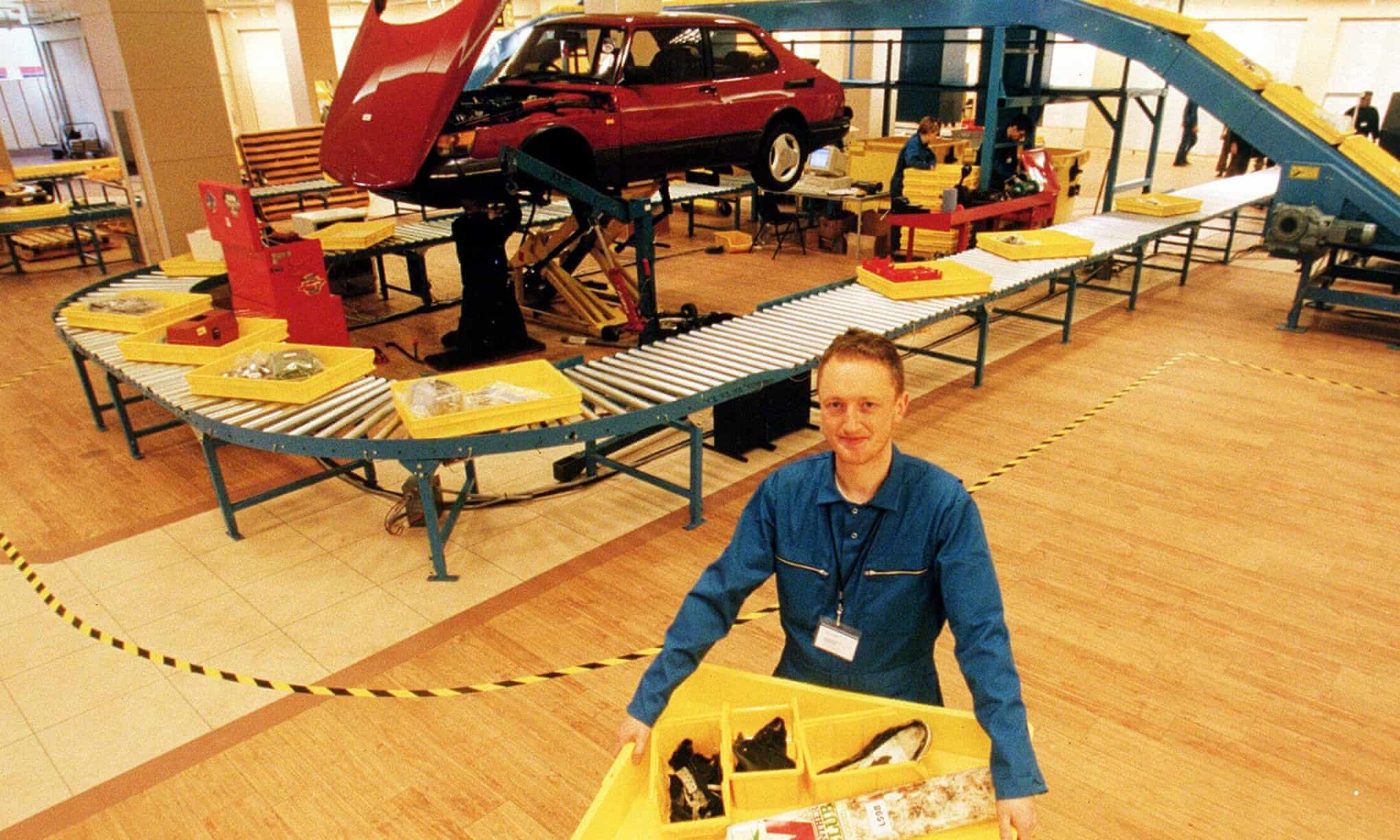 Twenty years and an epoch ago, Michael Landy destroyed his worldly goods, all 7,227 of them, in the just-closed flagship branch of C&A on Oxford Street in London. It was a wildly theatrical event. The mise en scène involved a snaking conveyor belt bearing tubs full of carefully catalogued objects, with a team of blue-boilersuit-clad “operatives” painstakingly disassembling each item, and the artist himself standing atop a high platform flinging items into great bins according to their material, prior to their long funereal journey to recycling or landfill.

In the centre of this tableau stood Landy’s red Saab 900, which gradually shrank as its doors, engine and electricals were removed. The whole thing took two weeks and his record collection was last to go: the team played Joy Division’s Love Will Tear Us Apart and David Bowie’s Breaking Glass over and over.

The world was a different place in February 2001. The paint was barely dry on Tate Modern. The art world in London was much smaller and less globalised, and the Young British Artists (YBAs) were in their pomp, Landy, then in his late 30s, being very much one of them. “We’re like the ex-members of a band,” he says now. “Yeah, it was good for a while.” Back then, the cloud and social media were not yet repositories of our archives and memories; everything owned had a material presence. Landy shredded family photos, handwritten love letters from former girlfriends, artworks he had made, artworks that friends had made. All are gone, for ever. And Break Down, as the artwork was named, has defined him ever since.

Of course, I want to know if he regrets it. His work studio is in east London, and is about 10 metres long, empty but for two tables, a sofa, a stool and a chair. The only artworks are some drawings on a table of the Dagenham Idol, an extraordinary wooden figure dating from around 2250BC, excavated when the Ford car works were being built. He’s playing with them for a forthcoming show at Colchester’s Firstsite about the idea of the “Essex man”.

The minimal aesthetic suggests that Landy’s lifestyle tends towards the ascetic, rather than the accumulative. But still: regrets? “I don’t miss anything,” he says. Then he hesitates. “I’ve never owned up to it, so I can’t own up to it now. I’ve always stuck to that. No, I literally can’t think of anything that I miss.” That’s his story and he’s sticking to it.

Looking back at Break Down, it is easy to think of it as a piece of YBA grandstanding: a stunt, a deliberately shocking gesture. But that’s to misunderstand it. “It wasn’t a frenzy of destruction,” says James Lingwood of Artangel, the commissioning body that produced it, when we speak on the phone. “It was more a quiet public dissection of possessions and what they are made up of. It was a lifestyle being taken apart, dissected and recycled.”

I do wonder whether he felt he had any kind of duty of care to Landy, as he made such an extreme gesture. After all, the title of the work hints at psychological disturbance. “He displayed none of the symptoms of mental ill health,” says Lingwood. “He set about it in a methodical, calm and systematic way. He’s an all-in artist.” No kidding.

There was a long, slow buildup to the two weeks of destruction: every item Landy owned – down to vitamin tablets, faxes, socks, paint rollers, cat food, teabags – was inventoried and classified by type, and logged on a computer. The event itself was oddly mundane, Landy tells me, a job of work. “For those two weeks, it was simple. I’d don my blue boilersuit, go into work, destroy things, come back, go to the pub and have a few drinks and take some Solpadeine the next morning.” A film shows operatives carefully dismembering, say, a toothbrush, separating out its constituent materials. Occasionally, a hammer is taken to something, but on the whole, says Landy, it was like “a production process in reverse”.

What was it like when it was all over? In the pub on the last night, he says: “I got very paranoid. I have talked about it as the happiest two weeks of my life, but it was also like witnessing my own funeral. People would come along who I hadn’t seen for years, and then I worked it out: I was only seeing them because I’d in a sense died.”

His gallery gave him some Gap clothes. Someone else got him a toothbrush. He was living with his partner, artist Gillian Wearing, “so I sponged off her stuff basically”. Soon afterwards, he was due to go to Spain. But he’d destroyed his passport and his birth certificate. That was a pain. Serves him right, you might say. (While Break Down is a remarkable artwork, I still find the idea of needlessly destroying perfectly good things a terrible and rather decadent waste – which Landy would say is part of the point.)

He didn’t make any art for a year. Then he began again, with etchings of the tiny, modest, overlooked plants that grow in cracks in urban pavements. “I’d had 12 operatives destroying things, 50,000 people coming to the exhibition in two weeks: it was all very public. I wanted to simplify my practice, to get it all back to just me and a plant.”

You might think of this – basically, botanical illustrations – as the absolute opposite of the gesture of Break Down. But it was another way of listing, making an inventory – not of possessions, but of obscure organisms that he felt some solidarity with. He’d done a lot of this kind of thing as a child: drawing as a way of amassing, categorising. Etching the little plants “was a homage to those stoical things that just exist, they don’t need us. I was one of those plants, I guess I didn’t need much nourishment to exist. And I was going back to cataloging things. I was becoming the quiet Michael again.”

He’s so chatty, friendly and forthcoming that it’s hard to think of Landy as quiet – and yet he was, he says, when growing up in Hackney and Ilford in east London, and then studying art at Goldsmiths with his YBA gang. “At school, I had a fringe and I just wanted to disappear behind it. At college, during group tutorials, I never really said anything.”

Break Down was a kind of shock therapy, forcibly turning him into an extrovert: he had to find ways to talk about the work, since there were reporters and film crews in every day, not to mention members of the public who wanted to ask questions and share stories about their own relationship with possessions. He’d figured out how to talk about the project by doing a ton of research on consumption and consumerism.

But I wonder, now, whether that wasn’t something of a smokescreen. Was that all it was about? Consumerism? Wasn’t it also, I ask, about your sense of self, your personhood? “Well, yes. Perhaps. I was probably in denial at the time. That’s the part I didn’t really want to deal with. I guess the most emotional bits were my mother coming in, and she started crying and I had to throw her out.” Wait a minute: you threw your weeping mother out of the show? “Yeah, it was like your mother’s crying, you’re dead or whatever. She’s crying as if she’s crying over your grave, and I had to chuck her out. I couldn’t deal with that.”

Landy’s mum and dad were Irish immigrants. “They worked hard, and they didn’t work for me to destroy my worldly belongings. Luckily, when my mum did come in, I was up on the platform, because otherwise she would have given me a clip around the ear.” One object that Landy didn’t destroy until right at the end, which went round and round the conveyor like an unclaimed suitcase, was a big old sheepskin jacket – his dad’s. “My mother had bought it on credit just before he had his industrial accident. After that, it became too heavy for him to wear any more. She still had to pay it off. In a sense, this sheepskin coat became him, travelling around on this yellow tray.”

John Landy, who died in 2012, had been a tunnel miner. “He built bits of the underground, the kind of immigrant work that other people don’t want to do.” In 1977, working near Hexham in Northumberland, a tunnel collapsed on him and he suffered a spinal injury. He never worked again, and was described in his medical notes as “a total wreck case”.

Landy later made a significant work about his dad, Semi-detached, in which a precise replica of his parents’ Ilford semi was erected in Tate Britain’s Duveen Galleries in 2004. It was the sort of emotionally loaded artwork he couldn’t have imagined making before Break Down. “I was interested in my dad’s value as a human being. What’s rubbish? What’s a weed? Why is my dad a total wreck case? That’s what preoccupies me.”

Those two dramatic weeks in C&A turned out to be an artistic enrichment, not an impoverishment. A beginning, not an ending.